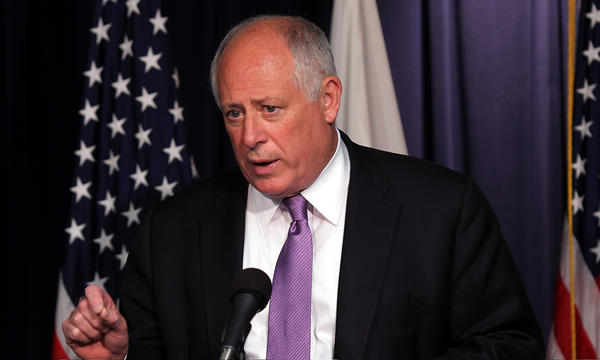 As he acted on the $33.7 billion budget, the Democratic governor followed through on a vow to close prisons and facilities for the developmentally disabled. He recommended shifting the bulk of $57 million lawmakers used to keep prisons open to help offset cuts to the state’s child welfare agency, which was first reported at chicagotribune.com Friday.

“I think the highest priority for me right now looking at the budget … is the Department of Children and Family Services needs more resources. A cut of $50 million by the General Assembly is far too much. We are under court consent decrees with the federal court. We have obligations to these children are depending on us,” Quinn said.

The governor noted that while the overall operating budget is comparable to what the state spent five years ago, the amount earmarked for pensions has roughly tripled during that time, from about $1.7 billion to nearly $5.3 billion.

“We just simply cannot afford this. The squeeze is on our money, our allocations for education, for human services, for health care, for public safety. Less and less of the percentage of our budget will go to those important causes if we don’t reform our pension system,” Quinn said.

Since lawmakers adjourned their spring session at the end of May, Quinn has met with top lawmakers in an attempt to strike a deal on public employee pension reforms.

But as was the case during the session, the talks have become bogged down by efforts from Quinn and leading Democrats, including House Speaker Michael Madigan, D-Chicago, to have suburban and Downstate school districts pick up the employer share of costs of teacher pensions now paid by the state.

While city property taxpayers pay the bulk of Chicago Public Schools teacher pensions, Republicans fear the move to tap suburban and Downstate schools could lead to higher property taxes. GOP lawmakers want a full examination of money that Chicago schools get from the state to be part of the discussion.

Quinn said he was “going to be disappointed” if legislators take the attitude that pension reforms should wait until after the Nov. 6 election of a new legislature. Unionized teachers and public workers are a powerful political constituency, and that could put reforms on hold until after the voting is done.

“The crying need for pension reform is right now,” the governor said. “We don’t want legislators think this is an issue that’s going away.”

Quinn said the budget cuts discretionary spending by $1.4 billion from the previous year, while addressing $1.3 billion in overdue bills out of a backlog that has approached $9 billion. Despite lawmakers’ decision to fully fund facilities the governor had recommended for closure, Quinn cut the $57 million they had set aside.

Shifting the money to DCFS will require the approval of lawmakers when they return to Springfield after the election. But Quinn said he’s prepared to plead his case.

“We have obligations to these children who are depending on us,” Quinn said.

The $50 million cut to DCFS was on top of a $35.3 million reduction Quinn proposed. Agency officials said they would have to cut programs and lay off 375 workers. Critics feared layoffs would mean case loads for investigators would soar.

Slated for closure are the Tamms super max prison in far southern Illinois, the Dwight Correctional Center for women in central Illinois and juvenile justice centers in Joliet and Murphysboro. Three centers that help inmates transition to life outside of prison will also close, including one on the West Side.

Quinn did propose one revenue idea Saturday: selling Tamms to the federal government. But he acknowledged it would be a lengthy process, noting similar efforts to sell off the vacant Thomson prison in northwestern Illinois. President Obama had originally planned to use Thomson to house transfers from Guantanamo Bay, but federal officials now say it will be used ease overcrowding elsewhere. Talks on that sale are ongoing.

The governor also wants to restore education funding. Legislators had proposed cutting secondary school funding by more than 3 percent, or $210 million, for the upcoming school year. They also called for a cut in higher education spending, reducing funding by about 6 percent to just under $2 billion.On top of the corrections closures, Quinn said his office will move forward with shuttering or consolidating 50 additional facilities, including the Tinley Park Mental Health Center. Savings from those closures will be used to transition residents from the state-run facilities to community care settings.